I’m gearing up for my “Afrochic” talk at CAA this Friday (!) but soon after that I will be heading to my natal city of DC to give another talk about some relatively new research of mine at the Library of Congress. Chocolate City Peeps come check it out! 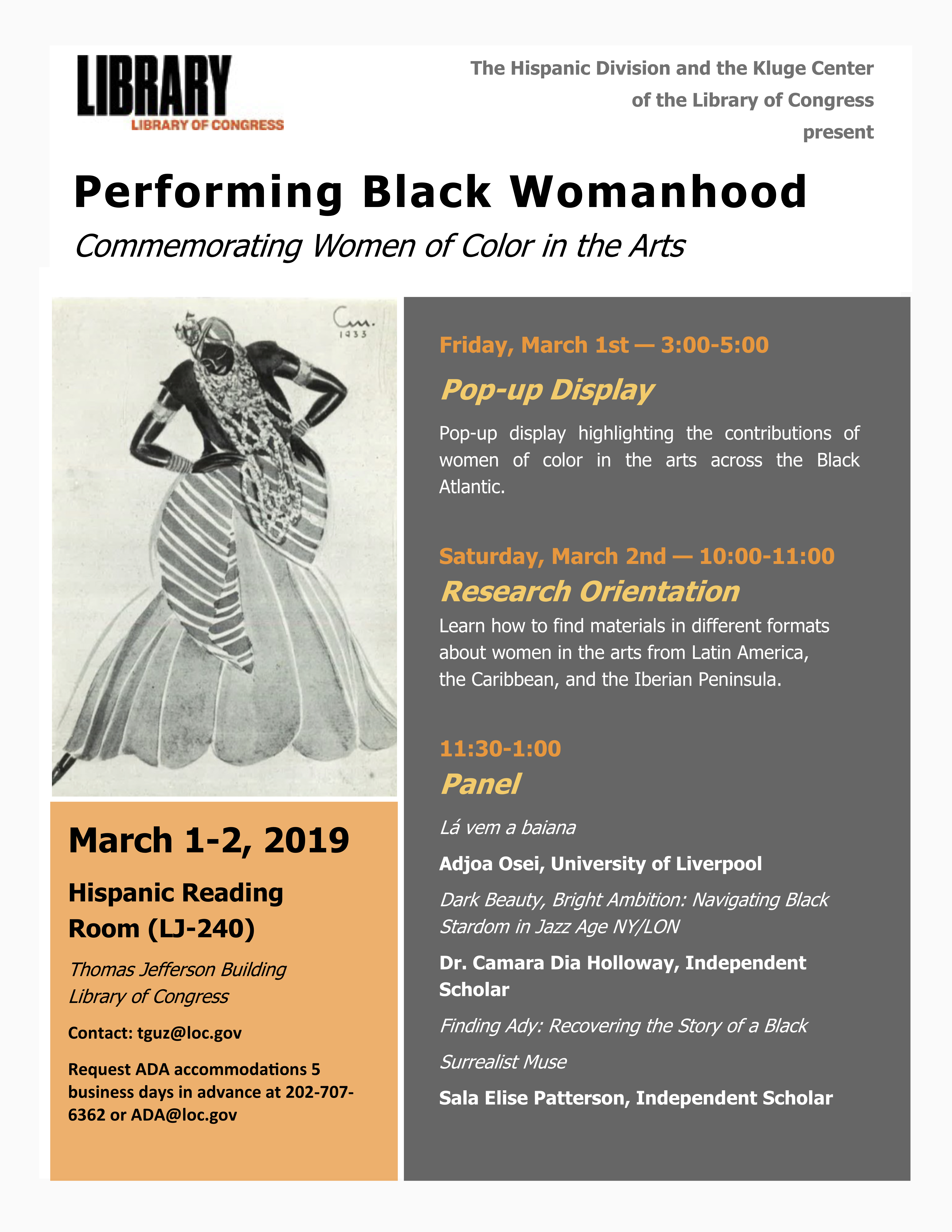 The Portuguese term baiana translates as ‘woman from the state of Bahia’, and refers to Afro-descendent women street vendors in Salvador de Bahia. Beginning in the 1920s, the black or mulata body in motion, as represented by the baiana, was officially elevated as a symbol of the modern, mestiça Brazilian corporality. This presentation explores the shifts in representations of the baiana archetype to an emblem of Brazilian national identity. I track the baiana across geographic spaces, performed on stage by various black women performers including Brazilian soprano Elsie Houston, Josephine Baker and Katherine Dunham.

This presentation is an exploration of the lives and careers of black women performers for whom London was the key point of anchor, besides Harlem, as they pursued their professional goals during the interwar period. With a thriving bohemian scene and ever-growing audience clamoring for jazz, the British entertainment industry provided plentiful opportunities for black performers. Florence Mills, Elisabeth Welch, Nina Mae McKinney and Edna Thomas will be amongst those discussed. Less studied than the New York-Paris axis, the NY/LON networks offer rich insights for those interested in this important moment in modernist and black cultural histories.

Dr. Camara Dia Holloway is an independent scholar whose research is focused on issues of race and representation between the Two World Wars. Her talk is drawn from ongoing research examining the interwar connections between Harlem and London entitled “Harlem on Thames.” Dr. Holloway earned her PhD from the Department of History of Art at Yale University. She is the founding co-director of the Association for Critical Race Art History (ACRAH).
camara.holloway@icloud.com

Adrienne ‘Ady’ Fidelin (1915-2004) was a Guadeloupean dancer and model who became muse to a core group of avant-garde artists in Paris, and the first Black model to appear in a major American fashion magazine. Fidelin is captured in hundreds of works by the celebrated American artist Man Ray, produced between 1936 and 1940 when the two were lovers. She was also the subject of work by Pablo Picasso, Lee Miller and Roland Penrose, yet there have been only scant and often erroneous references to her in literature on the period. This talk chronicles the decade-long, transatlantic effort to discover who Fidelin was, and what happened to her before and after those few, well-documented years with Man Ray. It asks why Fidelin “disappeared” in the first place, and how the tendency to marginalize black women’s stories played a part.

Sala Elise Patterson is a writer and researcher of overlooked stories of the African Diaspora. A former magazine editor, she has written for The Atlantic’s CityLab, New Internationalist, Ford Foundation Report, and T: The New York Times Style Magazine, where she brought Adrienne Fidelin’s story to the American mainstream in 2007 with the article, “Yo, Adrienne.” Patterson co-authored the bibliographic entry on Fidelin in the Oxford Dictionary of Caribbean and Afro-Latin American Biographies, and an essay on her in the forthcoming Musée D’Orsay exhibition catalogue for The Black Model: From Géricault to Matisse. She holds a BA from Columbia University in African-American Literature and an MSc in Development Studies from the School of Oriental and African Studies, University of London.
salap@hotmail.com